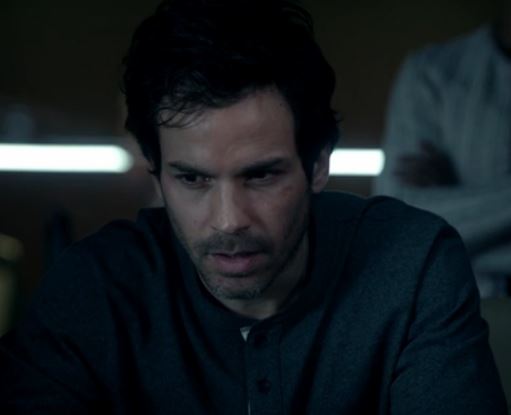 Catch Up on Salvation here

TGIF everyone!  Hope everyone has been enjoying “Salvation” this summer.  If you haven’t you need to check it out.  It is a great sci-fi summer series.  A meteor is hurtling toward Earth and will cause an extinction level event in 186 days.

The show follows 4 main characters as they try to save mankind.  Santiago Cabrera plays Darius Tanz, a tech billionaire and great mind, who is part of the team.

Watch Salvation Truth or Darius here
This week’s episode “Find the Hack” was a two hour event.  The show is becoming very fast paced.  Who has their own agenda?  Who can be trusted? Will the players lose their own humanity while trying to save the human race?  Very complex questions.
This episode was very hard for me to watch because of the torture scenes.  It was very hard to see Cabrera being waterboarded.  I do think he was excellent through the whole thing.  He is a very skilled actor.  Santi gives every performance his all.  His co-star, Charlie Rowe, tweeted,

I watched that torture scene on the day. @SantiagoC is my hero.

Thank you Charlie. That was some of the finest water board acting I have ever done #waterboacting @Charlie_Rowe #salvation

If you aren’t watching catch up now! Salvation is available on Amazon. If you are please encourage everyone you know to watch. The more viewers the better the chance there will be another season.

So get to watching! I wish you all Salvation!

Check out what Santiago and other cast members would take to Mars with them.

The world is ending. What would you save? Find out what the #Salvation stars would bring with them to move to another planet! pic.twitter.com/w3mZ0R7TwE